A World of Magic Awaits!

All your life you’ve lived in your village and listened to stories: stories from your grandparents about when magic first emerged in the world during their childhood, and stories from merchants and travelers about the wonders they’ve seen around the world.

Now the time has come for you to see this enchanted world for yourself. You and your friends will embark on a journey, leaving your village and venturing out to discover whatever is beyond the horizon. What will you encounter? What will you do along the way? It’s all up to you!

This book contains all the instructions you need for you and your friends to bring a vivid set of adventurers to life and guide them on their journey away from home to discover a magical world that’s limited only by your own imagination. All you need is this book, some gaming dice, a pencil and paper, and your imagination.

So what are you waiting for? Grab some friends, grab some dice, and begin your journey!

In this game, you won't find detailed combat rules or lists of carefully-prescribed spells. Instead, you'll find guidance for an experience of shared storytelling in which everyone has a say in what unfolds during your adventure. The rules take a "light touch" approach, gently prompting you to add joy or drama based on the scene and the characters, but leaves you room to manifest those narrative twists in whatever way is fun for you and your friends.

Additionally, Journey Away presents an introduction to an original fantasy setting. In the world of Adhara, you can be anyone you want, creating a character you can really identify with and make your own. As a special bonus, the setting bears the fingerprints of the game's biggest supporters: some of the Kickstarter backers named some creatures and places that are described in the book!

The rules and setting are supplemented with stunning full-color illustrations that really help to bring the game to life. Here's an example:

If you're ready for a lighthearted fantasy romp that gives you the freedom to do as you please in an original world of wonder filled with the love of a community, then give Journey Away a try!

In order to download this game you must purchase it at or above the minimum price of $15 USD. You will get access to the following files:

Support this game at or above a special price point to receive something exclusive.

If you can't afford this product, claim a free community copy. (If it says they're all claimed, let me know and I'll add more.)

If it would help you feel better about taking a free copy, tag me online to tell me you liked it! You wouldn't believe how seldom that happens, and like any creator, I love hearing I've made someone happy.

NOTE: If you bought the Racial Justice Bundle in early 2020, you already have this game!

Journey Away is a 25 page fantasy adventure narrative ttrpg with gorgeous art, a cool premise, and a tagline that I think is maybe scaring people off.

Journey Away bills itself as a "non-challenge-based rpg", but I'm having a hard time seeing that as true. There's a dice system. The outcomes of rolls matter. Character choices matter. Challenge exists, it's just not about your build or your tactical choices in combat.

I think how I'd describe Journey Away instead is as an extremely "yes but" system. Or, I guess for a more palatable tagline, as a "chill traveling rpg."

Rolls are done by generating large pools of dice based on all the circumstances at play in a situation (helpful traits, hindering traits, environmental factors on either side, etc) and then pairing them off. For each pair, if the die representing the stuff favoring the players was higher, it turns into a boon. If not, it turns into a complication. Then the group decides what each boon and complication means for the situation at hand.

As a result, outcomes are usually mixed---some good things happen, some bad things happen---and everything resolves at once. This creates a nice sense of pacing, where the dice are likely to come out at most once per scene, but when they come out, they matter and a bunch of stuff happens.

Journey Away comes with its own default setting (and it's got some nice notes, like magic being a recent discovery in the setting,) but it's pretty easy to run it in any setting you desire. There's nothing here that's firmly anchored to any specific lore, or that will break if it's taken out of context.

It's also probably a really solid first game, since it comes with good GMing advice, and the mechanics flow naturally to tell a story, rather than requiring you to dig through monster behaviors and weapon damage tables.

Overall, if you skimmed by this because the "non-challenge-based" tagline put you off, come back for another look. Journey Away is doing something really cool, and I'd love to see more settings for this engine.

-Page 12, When pairing dice, who pairs them? The player who rolled? The players as a group, alternating? The GM? Players and the GM alternating? The relevant section says it's "up to the players", but I wanted to double check the meaning on that, since how dice are paired has a huge effect on the boons to complications ratio.

Thank you for taking the time to write such a thoughtful and thorough comment! Interesting thought on the tagline; my thinking was that since complications don't have to be directly related to what you're doing—for example, maybe you win the armwrestling match but then your ex walks in the door—the game never declares your endeavors to have failed. But you raise a good point that it might give a weird impression and turn people off. Thanks for the tip!

Re: your question, the answer is "the players as a group, in whatever order or arrangement they feel like."

Do you want to tell a story without knowing where it will lead you ? That is the proposition of Journey Away. That should be the premise of many (if not all) RPG.

Journey Away is the tale of a journey, in a magical land. It's hopeful, refreshing, relaxing. The system is light and here only to add incertainty when needed.

The way it presents RPG to possible neophytes is great. "Just tell a story". 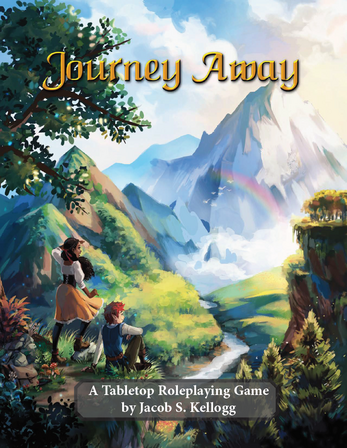